Asim Riaz has been in discussion for the last few hours. The Bigg Boss 13 runner-up tweet went viral for which he received a lot of criticism from the netizens. Asim tweeted about watching some dance clips and expressed his surprise at people moving so quickly. Netizens and Sidnaaz fans were quick to associate it with Shehnaaz Gill’s new video. It happened that shortly before Asim’s tweet, Shahnaz Gill’s video went viral, in which the actress is seen dancing on Jhingaat. And hence, netizens linked Asim’s tweet to Shehnaaz’s video. Sidharth Shukla and Shehnaaz Gill fans started criticizing the rapper/model for the same. Shame on Asim Riaz became a huge trend on Twitter. Also read- Asim Riaz finally reveals whether his controversial tweet was a dig at Bigg Boss partner Shehnaaz Gill

Apart from the fans, some celebs also gave their reaction on Asim’s tweet. Karanvir Bohra Shehnaaz came out in support of Gill and slammed him by sharing an old tweet without naming Asim. Karanvir had re-shared a tweet from the day of Sidharth Shukla’s funeral. This was the nasty comment he had heard. Retweeting the same, he said, “I guess it has to be retweeted, because some people can’t see others smiling, and especially when they are trying to come out of a dark place. It has nothing to do with #newworld, it’s called #tryingtoheal.” Also read- We are with Asim Riaz: Himanshi Khurana strongly defends boyfriend after he allegedly took a dig at Shehnaaz Gill – View Tweet 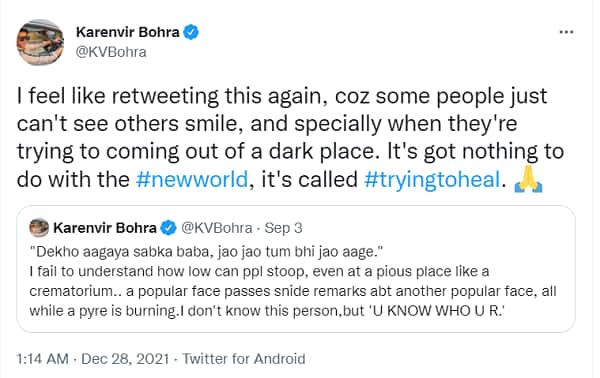 Around the same time, Asim and Himanshi’s friend Noman Elahi revealed that soon after the Twitter trend broke down, he called Asim, who cleared things up. Asim tells him that he too has a personal life and it was not found for Shehnaaz Gill. “Guys you need to chill.. I personally called @imrealasim and asked him.. he said noman is my own life and my friends too.. it was not for him.. remember – he always Have been there first for everyone when they needed him. We are with Asim Riaz.” Himanshi also jumped in the rescue of Asim. He lamented that people feel that their life is surrounded by such things. “But they don’t think that their personal life should be someone’s only person who revolves around them or all whose lies we have been writing, speaking, posting…. this is what is left in the world.” 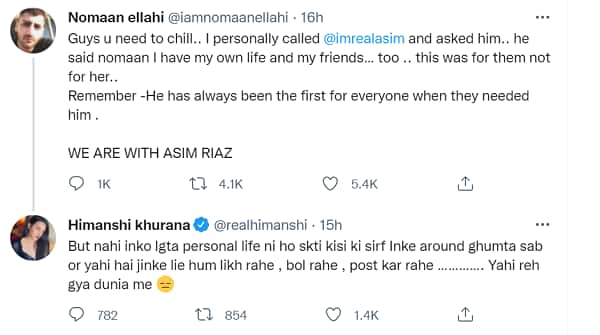 Later another tweet of Himanshi Khurana went viral. It was a stern tweet that left fans in shock. “You stabbed me a thousand times and then acted like it was bleeding……..do not stop blame game………….peace.” As soon as Himanshi left the tweet, netizens wondered if both the lovebirds had broken up.

Seeing all the negativity against her and Asim on Twitter, Himanshi finally fixed everything. Apart from reprimanding the fans, he also lashed out at the celebs. “When some fans find easy target to perfect the person out there, or some celebs also get a life to shame, then Asim Himanshi to Lakshya Kyuki Ya Woh Sirf Aapke Naye Mein Hi Baat. are… or dance to koi kar ni skta.ya pr bhi kitni kitni kridi news bhi lagwadi wah,” she said and also added that the two chose to keep quiet and not gossip.

Just a few hours ago, Vikas Gupta also came out in support of Shahnaz Gill. In a long post on Instagram, he said that everyone has their own way of dealing with grief. Check out his post below:

Asim Riaz remained silent the whole time. However, seeing how things were spiraling out of control, he offered an explanation. Just a few hours ago, he clarified that he was talking about his friends and not guesswork. Amidst all this, the fans of Asim Riaz are continuously supporting We Are With Asim Riaz.

Naagin 6 new promo gets trolled; netizens say, ‘This is the real pandemic of India’